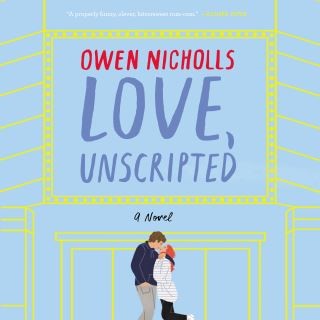 Owen Nicholls’ Love, Unscripted follows film projectionist Nick as he tries to understand the difference between love on the silver screen and love in real life. Perfect for fans of rom-coms, David Nicholls and Nick Hornby.

For film projectionist Nick, love should mirror what he sees on the big screen. And when he falls for Ellie on the eve of the 2008 presidential election, it finally does.

For four blissful years, Nick loved Ellie as much as he loved his job splicing film reels together in the local cinema. Life seemed . . . picture-perfect.

But now it’s 2012, Ellie has moved out and Nick’s trying to figure out where it all went wrong.

With Ellie gone and his life far from the happy ending he imagined, Nick wonders if their romance could ever again be as perfect as it was the night they met.

Can love really be the way it is in the movies?

OWEN NICHOLLS is a screenwriter with a masters in scriptwriting. His first screenplay—a biopic of the filmmakers Powell and Pressburger—was optioned to Bedlam Productions, the BAFTA- and Academy Award–winning producers of The King’s Speech. His work has appeared in Empire and NME, and in 2018 Love, Unscripted was selected for the Escalator talent development program run by the National Centre for Writing. Nicholls lives in Norfolk, England, with his wife and children. He previously worked at the Toronto International Film Festival and as a script reader at Vanguarde Artists in Toronto.