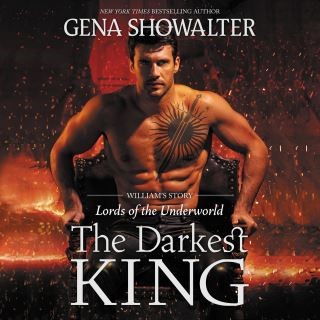 To become a king of the underworld at long last, William must resist an irresistible beauty—or a curse will ensure his end…

A merciless prince feared by all…

Cursed by a vengeful witch, William of the Dark will die if he ever falls in love—murdered by the woman who steals his heart. His lone shot at redemption is a book filled with indecipherable code. Break the code, break the curse. Now, centuries later, he’s condemned to a string of one-night stands…until he finds the only woman in the worlds able to set him free.

A rare creature of myth and power…

One of the last living unicorn shifters, Sunday “Sunny” Lane works from the shadows as a cryptanalyst, on the run from assassins and poachers. Then the darkly seductive William abducts her, holding her captive in Hell. The closer they get, the more she hungers for his touch…and the stronger a mystical desire to kill him becomes…

But which desire will prove stronger—lust or death? And who will give in first?

Gena Showalter is the New York Times and USA TODAY bestselling author of over seventy books, including the acclaimed Lords of the Underworld series, the Gods of War series, the White Rabbit Chronicles, and the Forest of Good and Evil series. She writes sizzling paranormal romance, heartwarming contemporary romance, and unputdownable young adult novels, and lives in Oklahoma City with her family and menagerie of dogs. Visit her at GenaShowalter.com.