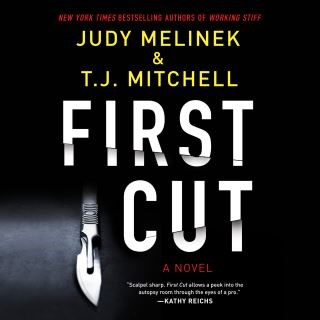 A Bustle Most Anticipated Book of January 2020

A young rookie medical examiner. A suspicious case. An underworld plot only she saw coming.

From the New York Times bestselling authors of Working Stiff

For San Francisco’s newest medical examiner, Dr. Jessie Teska, it was supposed to be a fresh start. A new job in a new city. A way to escape her own dark past.

Instead she faces a chilling discovery when an opioid-overdose case contains hints of something more sinister. Jessie’s superiors urge her to close the case, but as more bodies land on her autopsy table, she uncovers a constellation of deaths that point to an elaborate plot involving drug dealers and Bitcoin brokers.

Drawing on her real-life experiences as a forensics expert, Judy Melinek teams up with husband T.J. Mitchell to deliver the most exhilarating mystery of the year. Autopsy means “see for yourself,” and Jessie Teska won’t stop until she has seen it all—even if it means that the next corpse on the table could be her own.

JUDY MELINEK, M.D., was an assistant medical examiner in San Francisco for nine years, and today works as a forensic pathologist in Oakland and as CEO of PathologyExpert Inc. She and T.J. Mitchell met as undergraduates at Harvard, after which she studied medicine and practiced pathology at UCLA. Her training in forensics at the Office of Chief Medical Examiner of the City of New York is the subject of her first book, the memoir Working Stiff.

T.J. MITCHELL is a writer with an English degree from Harvard, and worked in the film industry before becoming a full-time stay-at-home dad. He is the New York Times bestselling author of Working Stiff: Two Years, 262 Bodies, and the Making of a Medical Examiner with his wife, Judy Melinek.