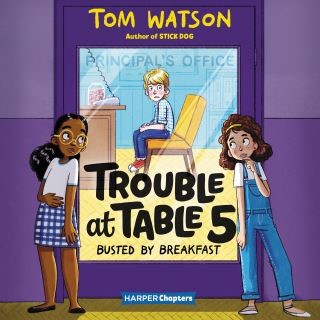 Trouble at Table 5 #2: Busted by Breakfast

From the author of Stick Dog comes the second book in an early chapter book series about three best friends whose plans, missions, and schemes are sure to shake up their school.

Simon always has a lot to say. And sometimes he can’t stop talking–even in the middle of class.

When Simon gets in trouble for jabbering at school, his best friends, Molly and Rosie, think up a plan to keep him from getting grounded at home! It involves cars, suds, and pink plastic flamingos! But will their big plan turn into an even bigger disaster?

Each hilarious friendship story in this series is designed to set independent readers up for success!

Tom Watson lives in Chicago with his wife, daughter, and son. He also has a dog, as you could probably guess. The dog is a Labrador-Newfoundland mix. Tom says he looks like a Labrador with a bad perm. He wanted to name the dog "Put Your Shirt On" (please don't ask why), but he was outvoted by his family. The dog's name is Shadow. Early in his career Tom worked in politics, including a stint as the chief speechwriter for the governor of Ohio. This experience helped him develop the unique, storytelling narrative style of the Stick Dog books. More important, Tom's time in politics made him realize a very important thing: Kids are way smarter than adults. And it's a lot more fun and rewarding to write stories for them than to write speeches for grown-ups.