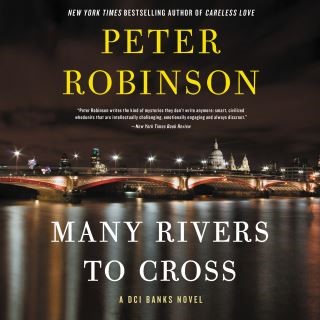 Many Rivers to Cross

Peter Robinson, the acclaimed author of the bestselling series Stephen King calls “the best now on the market,” returns with a gripping, emotionally charged mystery in which the revered detective Alan Banks must find the truth about a murder with possible racial overtones—and save a friend from ruin.

In Eastvale, a young Middle Eastern boy is found dead, his body stuffed in a wheelbarrow on the East Side Estate. Detective Superintendent Banks and his team know they must tread carefully to solve this sensitive case. But tensions rise when they learn that the victim was stabbed somewhere else and dumped. Who is the boy, and where did he come from?

Then, in a decayed area of Eastvale scheduled for redevelopment, a heroin addict is found dead. Was this just another tragic overdose or something darker?

To prevent tensions from reaching a boiling point, Banks must find answers quickly. Yet just when he needs to be his sharpest, the seasoned detective finds himself distracted by a close friend’s increasingly precarious situation. He needs a break—and gets one when he finds a connection to a real estate developer that could be key to finding the truth.

With so many loose ends dangling, there is one thing Banks is sure of—solving the case may come at a terrible cost.

One of the world’s most popular and acclaimed writers, Peter Robinson is the best-selling, award-winning author of the DCI Banks series; he has also written two short-story collections and three stand-alone novels, which combined have sold more than ten million copies around the world. Among his many honors and prizes are the Edgar Award, the CWA (UK) Dagger in the Library Award, and the Swedish Crime Writers’ Academy Martin Beck Award.

Simon Prebble has worked extensively on British and American television as both actor and narrator.