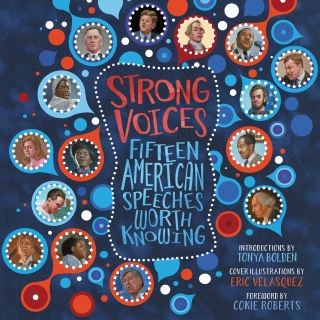 Strong Voices: Fifteen American Speeches Worth Knowing is a collection of significant speeches, made both by those who held the reins of power and those who didn’t, at significant times in American history. Read the original words—sometimes abridged and sometimes in their entirety—that have shaped our cultural fabric.

Introductions by acclaimed writer Tonya Bolden provide historical context and critical insights to the meaning and impact of every speech. This collection includes the following:

Strong Voices is a tremendous introduction to the extraordinary words spoken in history.

Tonya Bolden’s books have earned much praise and numerous starred reviews. Her work has been recognized with the NCTE Orbis Pictus Award for Outstanding Nonfiction for Children and the Carter G. Woodson Book Award and listed as a CBC/NCSS Notable Social Studies Trade Book for Young People. She is also the recipient of the Children’s Book Guild of Washington, DC’s Nonfiction Award for her body of work. Her Maritcha: A Nineteenth-Century American Girl was a Coretta Scott King Author Honor book. Visit her website at www.tonyaboldenbooks.com.

Cokie Roberts was a political commentator for ABC News and NPR. She won countless awards and in 2008 was named a “Living Legend” by the Library of Congress. She was the author of the New York Times bestsellers We Are Our Mothers’ Daughters, Founding Mothers, Ladies of Liberty, and, with her husband, the journalist Steven V. Roberts, From This Day Forward and Our Haggadah.