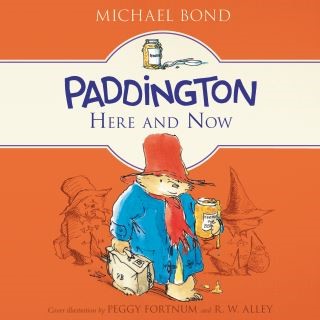 Paddington has warmed the hearts of generations of readers with his earnest good intentions and humorous misadventures. This new audiobook edition of the classic novel contains the original text by Michael Bond.

If Paddington Bear learned anything from his Uncle Pastuzo, it’s that home is where you hang your hat. And for Paddington, nothing feels quite like home than being with the Brown family. Whether Paddington is starring in a surprise concert performance while eating a marmalade sandwich or thwarting a burglary attempt from Gentleman Dan, the Drainpipe Man, this one-of-a-kind bear keeps the Brown family home full of adventure and laughter.

Michael Bond began chronicling Paddington’s adventures in his first book, A Bear Called Paddington, published in 1958. Fortunately, bears don’t need much encouragement, and Paddington has since filled the pages of twelve further novels, a variety of picture books, and many other projects written for the young at heart.

Stephen Fry was born in London in 1957 and educated at Stout's Hill, Uppingham, and Queens' College, Cambridge. At Cambridge he joined the Footlights, where he first met Hugh Laurie. He has numerous television appearances to his credit, most notably, A Bit of Fry and Laurie, Jeeves and Wooster, Blackadder, QI, and House. Major film roles include Peter in Peter's Friends (1990) and Oscar Wilde in Wilde (1997); in the realm of television, his critically acclaimed The Secret Life of a Manic Depressive won an Emmy. He is the author of the best selling novels The Liar, The Hippopotamus, Making History, and Revenge: A Novel, as well as the highly acclaimed autobiography Moab Is My Washpot and, in 2005, a well-received guide to writing poetry, The Ode Less Travelled.