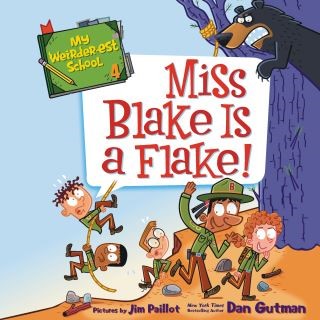 My Weirder-est School #4: Miss Blake Is a Flake!

With more than 23 million books sold, the My Weird School series really gets kids reading!

In this fourth book in the My Weirder-est School series, A.J. and his friends learn how to survive in the wilderness.

At-ten-tion! The Beaver Scouts are looking for new recruits. And A.J. and his friends are the first to sign up. They can’t wait to build campfires and earn cool badges.

But scout leader Miss Blake would rather prepare them for falling boulders and surprise bear attacks. When they go on an overnight camping trip, will they be prepared for a real emergency?

Perfect for reluctant readers and all kids hungry for funny school stories, Dan Gutman’s hugely popular My Weird School chapter book series has something for everyone. Don’t miss the hilarious adventures of A.J. and the gang!