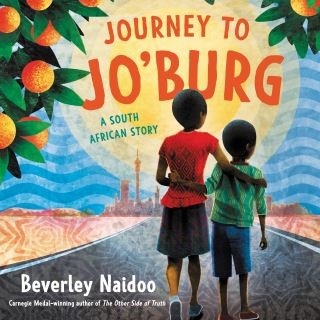 A classic look at prejudice and racism in apartheid South Africa, this short and compelling novel is perfect for independent reading projects and classroom sharing.

Separated from their mother by the harsh social and economic conditions prevalent among blacks in South Africa, thirteen-year-old Naledi and her younger brother make a journey over 300 kilometers to find her in Johannesburg.

Mma lives and works in Johannesburg, far from the village Naledi and Tiro call home. When their baby sister suddenly becomes very sick, Naledi and Tiro know, deep down, that only one person can save her.

Bravely, alone, they set off on a journey to find Mma and bring her back. It isn't until they reach the city that they come to understand the dangers of their country, and the painful struggle for freedom and dignity that is taking place all around them.

Beverley Naidoo grew up in South Africa under apartheid. She says: "As a white child I didn't question the terrible injustices until I was a student. I decided then that unless I joined the resistance, I was part of the problem." Beverley Naidoo was detained without trial when she was twenty-one and later went into exile in Britain, where she has since lived.

Her first children's book, Journey to Jo'burg, was banned in South Africa until 1991, but it was an eye-opener for thousands of readers worldwide. Her characters in Chain of Fire, No Turning Back, and Out of Bounds face extraordinary challenges in a society she describes as "more dangerous than any fantasy." She has won many awards for her writing, including the Carnegie Medal, the Jane Addams Book Award, and the American Library Association Best Book for Young Adults for The Other Side of Truth, about two refugee children smuggled to London who are also featured in Web of Lies.